★ A member of the development team shared their loadout with us! Let's take a look at their Keyblade setup and see how they set up their Medals!

* The development team member provided their Medals and comments in Japanese. We've translated them below!

★ Most of the setup uses relatively older Medals and skills, but you can see that all Medals have traits and skills!
It makes use of three Imitation Medals to copy the Medals with powerful Special Attacks!

★ Skills and traits are also valuable when dealing as much damage as possible!

[Skills]
・Scrooge Medals can transfer their skills onto your Medals! Scrooge Medals often come included in various Avatar Boards and other rewards.
・There are many kinds of skills, including ones that increase damage or increase the amount of Lux gained! You can confirm what these skills do by looking at the Scrooge Medal's details!

TIP: When you're trying to transfer a skill, be careful where you place Medals in the Level Up screen! Only the Medal placed on the far left will be able to transfer its skill!

TIP: You can transfer skills attached to other Medals, not just Scrooge Medals. If the skill is at maximum level, the skill will have a 100% chance to transfer!

[Traits]
・Level up a Medal using other Medals of the exact same name and rarity* or its designated Trait Medal to unlock persistent effects!
* You can unlock traits on a 7★ Medal by using 6★ or 7★ Medals of the exact same name, or its designated Trait Medal.
・These traits can lower the defense of ground enemies or allow a Medal to attack twice, amongst other effects!
Learn more about traits here!

★ Let's check out how much of a difference a skill or trait can make when dealing damage! 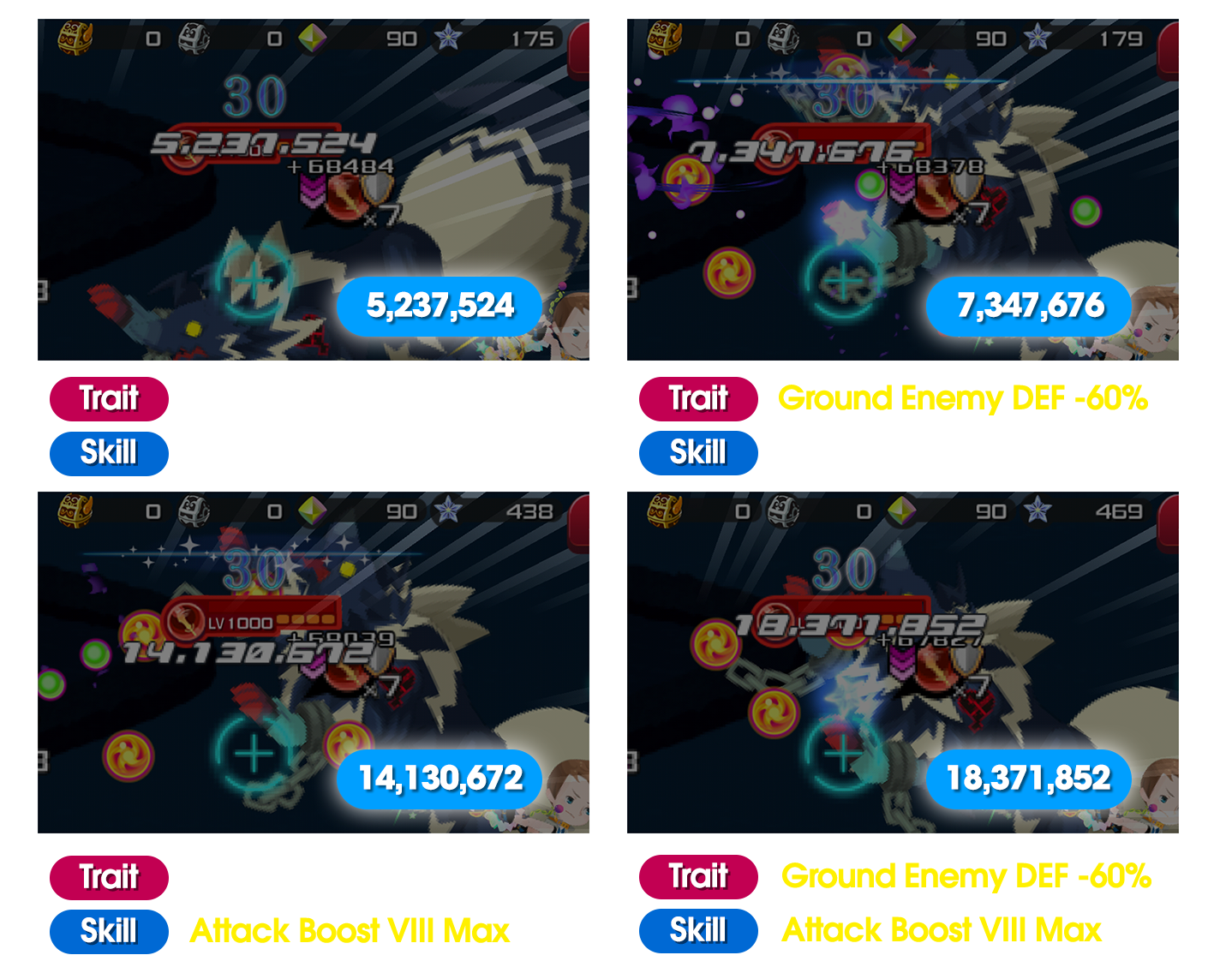 ★ The damage shown above can be increased even further with various buffs and debuffs, as well as combining other traits!
★ Come up with your own powerful setup using the various tips we've gone over thus far!

★ This time we'll be going over how you can obtain the Organization XIII avatar parts!

★ Your Lux level will increase as you earn more Lux by attacking and defeating enemies! 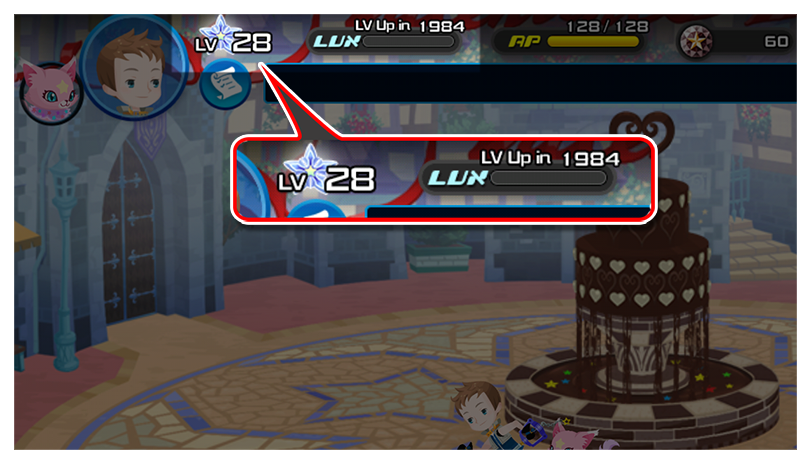 TIP: Once you unlock the boards, you can access them by selecting [Avatar Boards] in the bottom left of the HOME screen!

★ You can earn a lot of Lux at once by participating in Raid Boss events!
Attack and defeat the Raid Boss that appears when you clear the quests!

TIP: You can still get a lot of Lux by just attacking the Raid Boss. But if they tend to escape before you can finish them off, you could join a party and enlist the help of fellow Keyblade wielders!

* The Raid Boss event banner displayed above is from an event that was ongoing on Mar. 1, 2019.

★ In this section, we'll be going over some basic ways you can earn Jewels! Jewels are the main form of currency in KHUχ, and it's always helpful to have some on hand!

(2) Complete missions for rewards!
・You can get Jewels by completing Daily and Weekly missions!
・Daily missions in particular are fairly easy to complete! You can earn up to 300 Jewels a day by completing quick objectives such as clearing quests or participating in PvP! 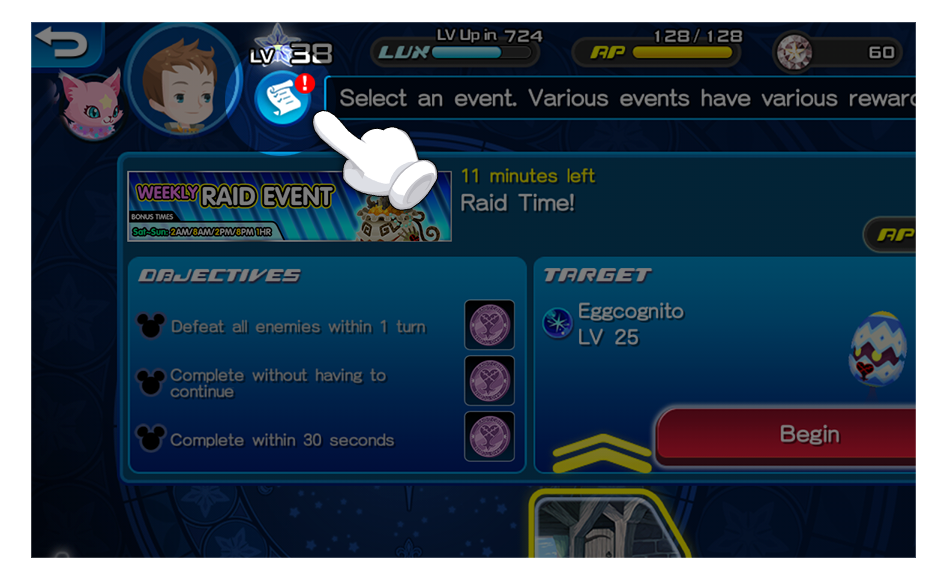 TIP: Don't forget to accept your rewards from the Missions screen after completing a mission!

(3) Get them from various boards!
・Check out various event reward boards, as they may include spaces that reward Jewels! 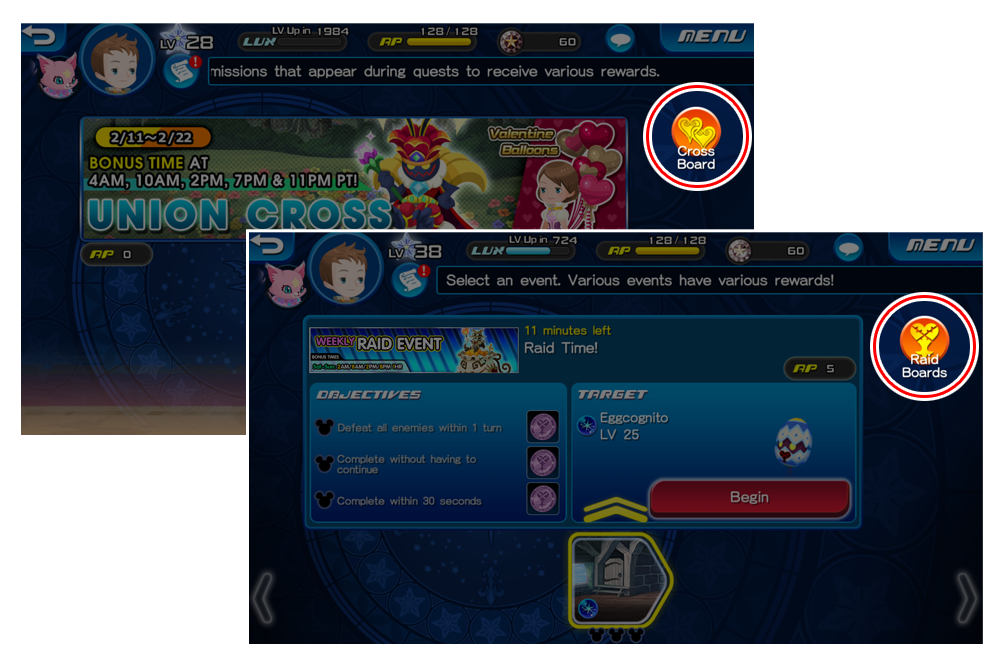 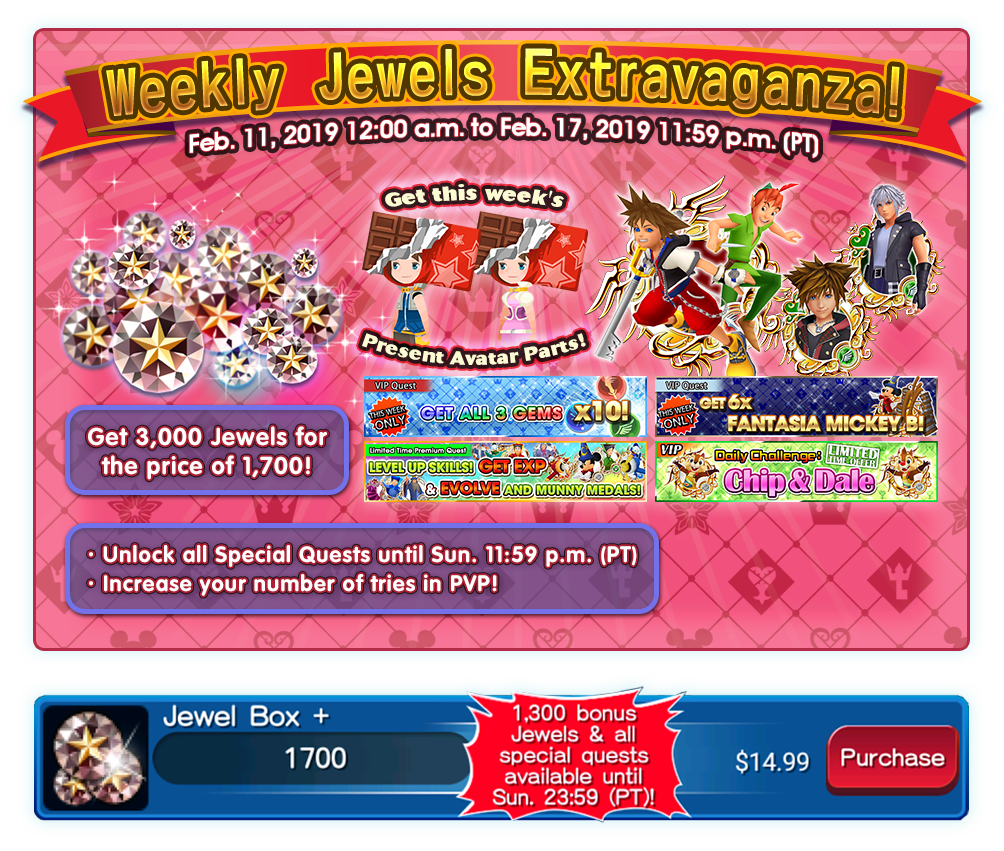 ★ Once a week, you can purchase the Weekly Jewels Extravaganza! This Deal gives you 3000 Jewels and allows you to access exclusive VIP bonuses until Sunday at 11:59 p.m. (PT)!

★ No matter how high your Medal's Damage Multiplier or Special Attack Bonus may be, if its STR (Strength) stat is lower than the enemy's DEF (Defense) stat, you'll only inflict 1 damage!
Let's try powering up your Medal's Attack, then take advantage of various buffs and debuffs! 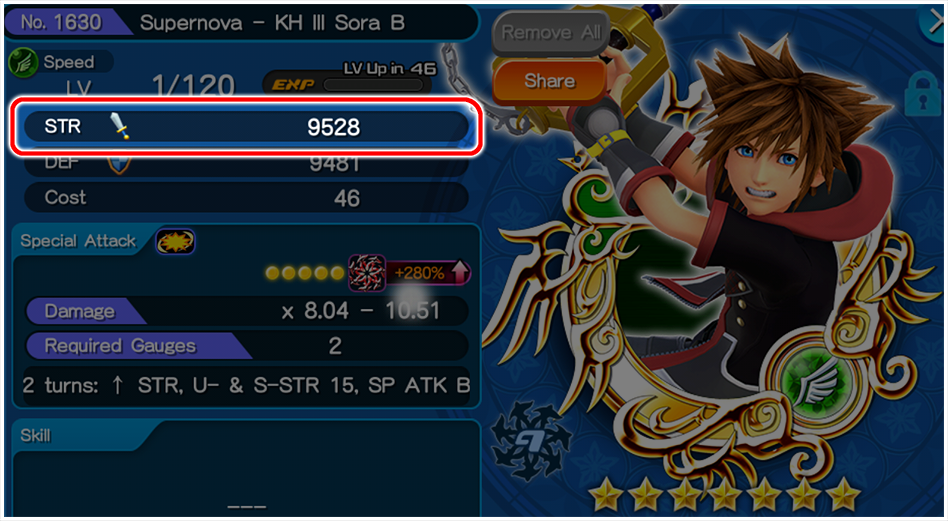 TIP: When leveling up your Medals, you can enable [Sort] > [Filter] > [EXP] to bring EXP Medals you own to the top of the list!

(2) Use Chip Medals to increase your Medal's STR even further!
・You can use the Chip Boost Medal for additional STR on your Medal! You can get Chip Medals from various event and board rewards!
・Depending on the Medal, Chip Medals can increase STR up to a maximum of +1000 - +3000 from the original value!

TIP: When leveling up your Medals, you can enable [Sort] > [Filter] > [Boost] to bring Chip Medals to the top of the list!

★ In addition to the above methods, you can take advantage of Attack Boost skills and Ground / Aerial Enemy DEF -60% traits to increase your damage even further!
(We'll cover Skills and Traits later on!) 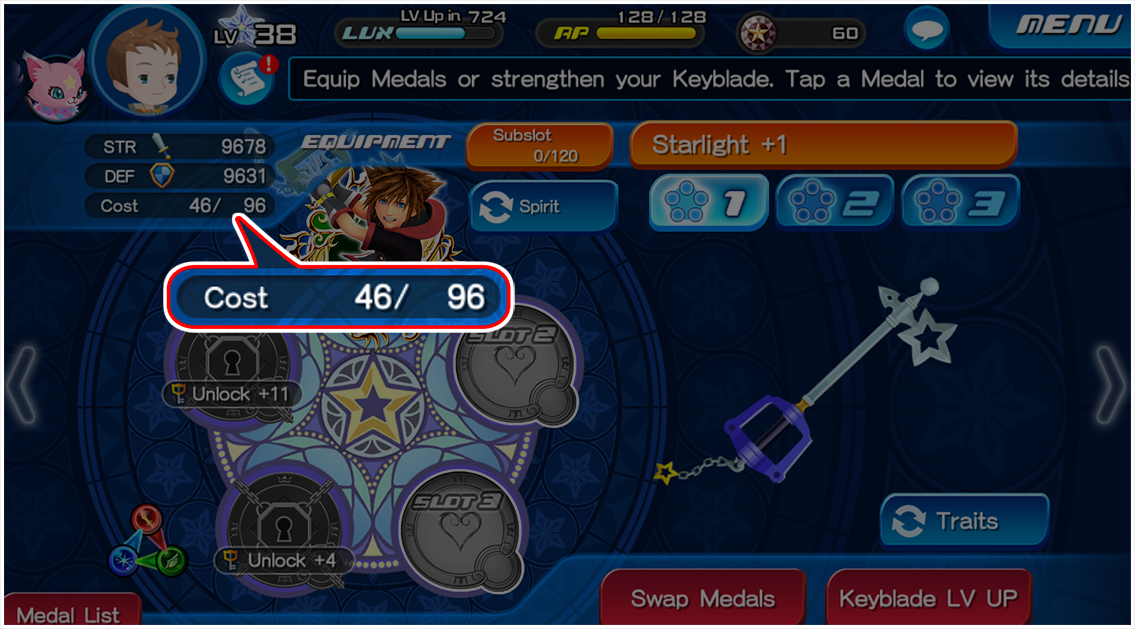 ★ Your Medal deck comes with a cost limit, which may make it difficult to use strong Medals at first. But don't worry, you can use the methods below to equip as many strong Medals as possible!

(2) Lower the cost of your Medals!
・By fusing your Medal with Cid, Cid 5, and Cid 10 Medals, you can lower its cost as much as -20 from its original amount!

TIP: When leveling up your Medals, you can enable [Sort] > [Cost] to bring Cid Medals you own to the top of the list!

・You can get the various Cid Medals from event rewards! 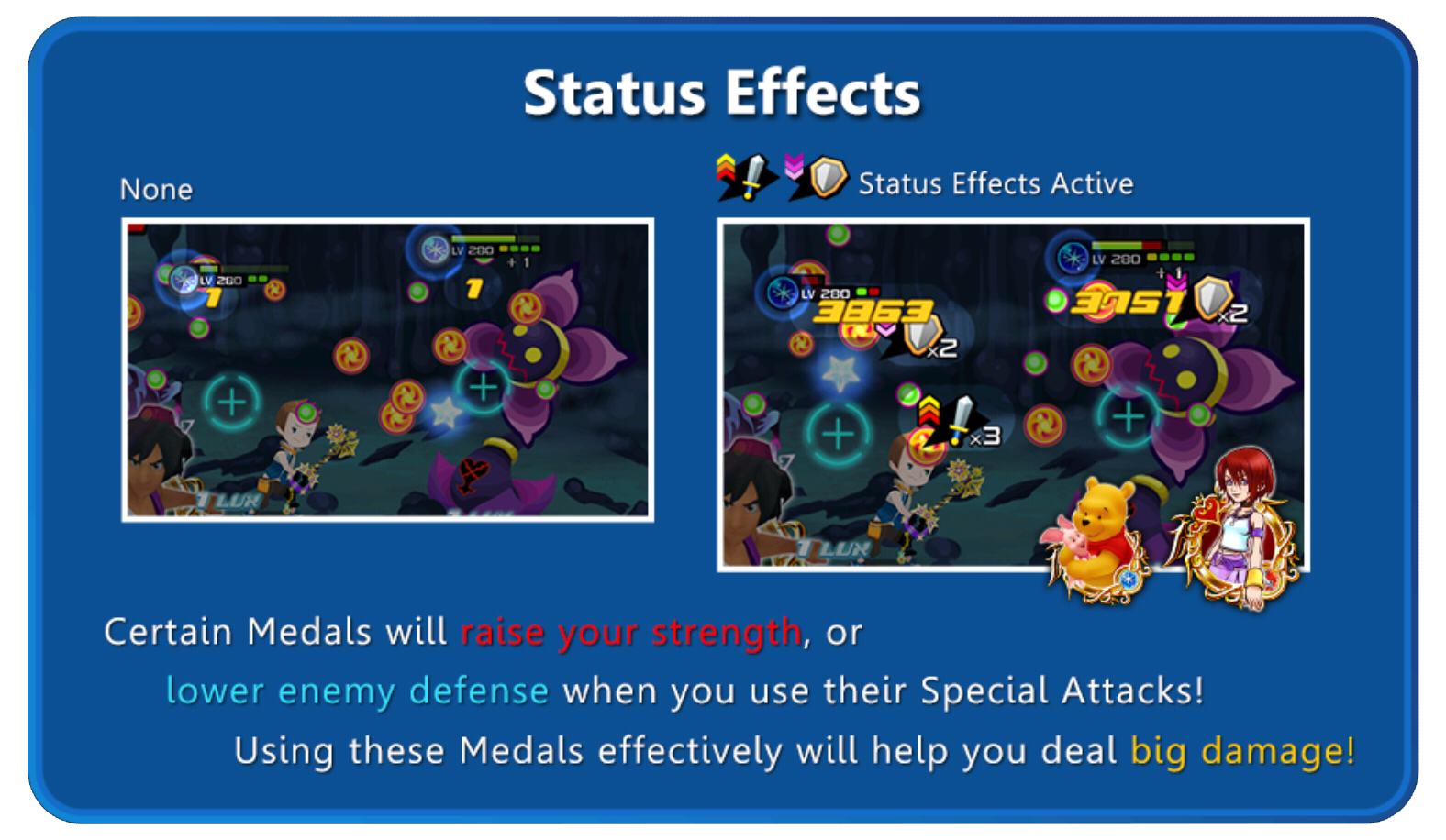 ★ In order to effectively deal damage to enemies, you'll need to know about effects that make you stronger (buffs) and effects that weaken enemies (debuffs)! 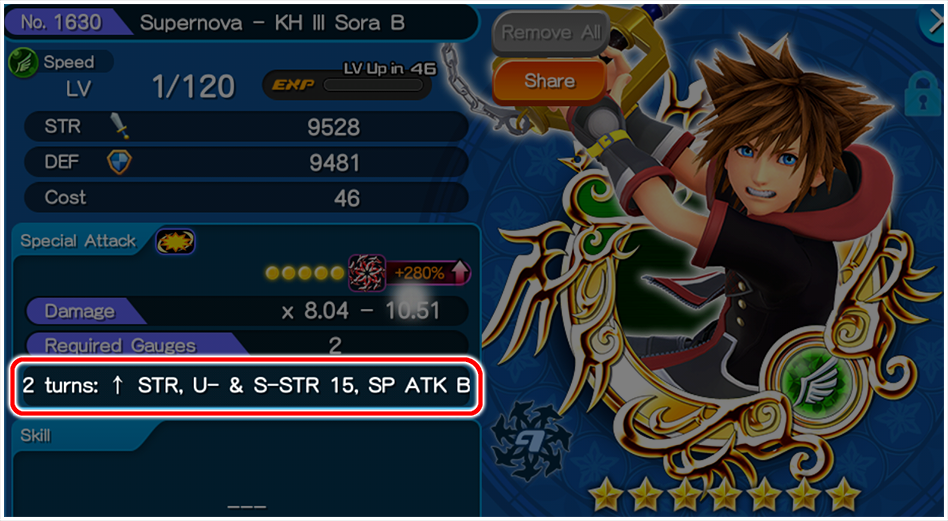 ★ By equipping Medals with buffs/debuffs in the earlier Medal slots of your deck, the later Medals will benefit from those effects and deal large amounts of damage!

TIP: Buff/debuff effects can be stacked up to 15 times!

◆ Part 1: Experience KHUχ's story and its connections to KHIII! ◆ 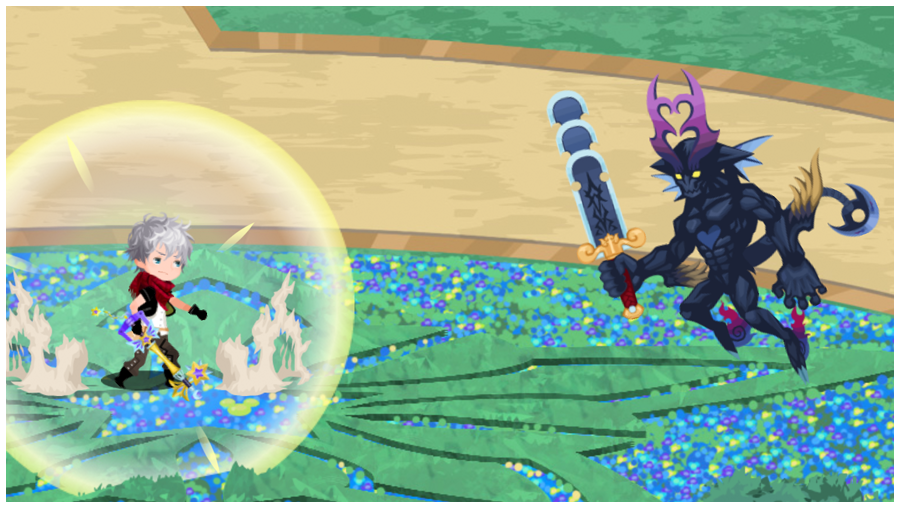 ★ The silver-haired Keyblade wielder, Ephemer, holds the key to the story! He debuts in Story Quest 362!
You can play Story Quests by selecting [Quests] in the bottom left corner of the HOME screen, then selecting [STORY]!

★ Stronger enemies will appear as you proceed through the quests! Strengthen your deck to prepare yourself!
One way to obtain Medals is through Medal Deals!

★ Check [Presents] from the bottom right of the HOME screen to receive your KH III Release Celebration Jewels! You can use Jewels to draw from Deals for more Medals!

★ Open up [Equipment] from the bottom left of the HOME screen to equip Medals you've obtained!
You can also select "Optimize" at the quest screen to have Medals automatically chosen for you!

★ Now you're ready to take on some Story Quests! Enjoy!